It has come to my attention that a long-time and prevalent user on the r/Anarchism subreddit has been making some outright sexist comments, as well as defending rape. User MikeBoda, who goes by the name of Mike Koz, is an active anarchist here in Chicago, and the community should be aware of where his ideas on anarchy and revolution truly lie. Here are some choice comments: 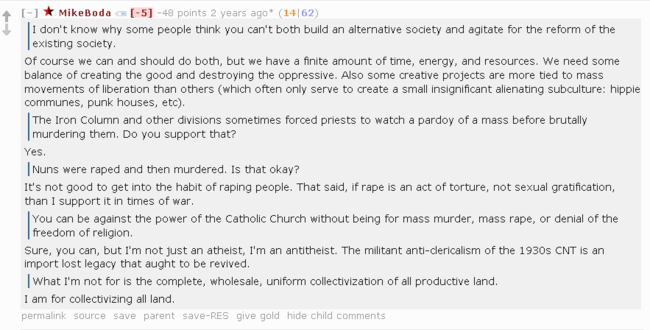 These comments were made two years ago, and while an attempt was made to ban him from the subreddit, it was blocked by users who view Mr. Koz as a “valuable contributing member despite holding bizarre views.” Users have recently begun to call him out on this behavior again, and he has done nothing but defend his views. To be clear, he is literally defending the practice of raping nuns.

Not only is this a clear problem within this particular reddit community, but it is also something endemic to anarchists, and even the Left in general. Just because a person may harbor some similar ideas, or even call themselves an anarchist, we are under no obligation to work with or befriend them. Terrible and harmful ideas must be opposed on all fronts, and they cannot be let to just pass under the radar because a person is a contributing member of the scene.

Ideas and views like those espoused by Mike Koz can be seen in anarchist scenes all over. From Brandon Darby in New Orleans, the misogynist anarchist turned FBI informant, to Dennis Burke, the NYC abuser and snitch. This harmful “macho” behavior should not be tolerated, and should be called out at every instance, regardless of who is saying it. Simply because someone has a reputation as a “good anarchist,” or may appear to be smarter and therefore theoretically correct, they should not get a free pass to apologize and advocate for torture and rape.

Mike Koz has ties to the Chicago IWW, the First of May Anarchist Alliance, and the Black Rose Anarchist Federation. His obscene views reflect upon these groups, as they have either unknowingly allowed him to participate alongside them…or, even worse, they may have known about these comments and simply swept them under the rug. I urge any organization involved with Mr. Koz to not only distance themselves from him, but to also call him out on the fact that he is a rape advocate. Any inaction on these groups parts is absolutely indicative of either support of these views, or an unwillingness to challenge them.

Legend of the Galactic Heroes

In light of my last post, I offer some science fiction…because I am just full of contradictions. Legend of the Galactic Heroes is an anime from the 80s that steers away from the usual tech-centric themes, and dives deep into the... Continue →